Klaudia//February 1, 2023
Beyonce is nominated in three categories at the 2023 Kids Choice Awards. The ceremony is set to air live on Saturday, March 4, at 7 p.m. (ET/PT) from the Microsoft Theater in Los Angeles. Check the nominations below:

Beyoncé reportedly set to bring her Renaissance tour to Australia

Klaudia//February 1, 2023
Beyoncé is set to bring her Renaissance world tour to Australia next year.

Daily Mail Australia can reveal that tour promoters have been working hard to try and bring the American super star Down Under and that 'dates have been locked in'.

'They've been planning it for a while and dates have been locked in. It's 100% happening, an announcement is imminent,' the insider revealed.

The Grammy award winner is set to pocket millions when she headlines shows in Sydney, Melbourne, Brisbane, Adelaide and Perth before playing shows in Auckland.

Beyoncé's Renaissance tour will kick off in May, with the Break My Soul singer expected to visit towards the end of 2023 or at the beginning of 2024.
Read more
News & Rumors, Tours

Beyoncé announced her long-awaited tour for her seventh studio album "Renaissance" on Wednesday to kick off Black History Month.

The album, which debuted in July, is an ode to Black queer culture. Disco anthems, soulful ballads and sexy lyrics are packaged together in "Renaissance."

Beyoncé's world tour kicks off in May and ends in September. Ticket information is available on her website.
Read more
News & Rumors, Photos, Tours

Klaudia//January 28, 2023
Drake and Beyoncé are leading nominations at the 2023 Urban Music Awards alongside Stormzy and a host of other artists. The hip-hop/R&B/soul-centered event is happening on February 28th at the Porchester Hall in London. Given the ceremony’s focus on both U.S. and U.K. artists, there’s a lot of variety in these picks.

Starting with Album of the Year, nominees include Her Loss and RENAISSANCE from the aforementioned U.S. superstars. Another leading force was Stormzy, who’s also nominated in this category for This Is What I Mean. Other nominees include Little Simz’s NO THANK YOU, Knucks’s Alpha Place, and Kojey Radical’s Reason to Smile. The list continues with Chris Brown’s Breezy, DJ Khaled’s God Did, Cleo Sol’s Mother, and Dave’s We’re All Alone in This Together.

Also, they nominated both Drake and Beyoncé in the U.S. section of the Artist of the Year award. They face Chris Brown, Lizzo, DJ Khaled, Cardi B, Coi Leray, GloRilla, Latto, 21 Savage, Megan Thee Stallion, Nicki Minaj, and Jack Harlow.

Voting is now live and will remain open until February 20th. You can find the link to register and vote here.
Read more
News & Rumors, Music, Awards

Klaudia//January 28, 2023
Beyonce and her husband Jay-Z touched down at the Van Nuys Airport in Los Angeles on Thursday. After her performance in Dubai, the Carters reportedly went to the Maldives for a family vacation and stayed at the Waldorf Astoria Ithaafushi resort.

Klaudia//January 22, 2023
Superstar singers Beyonce and Madonna will go head-to-head this summer as both stars embark on global tours.

Former Destiny’s Child singer Beyonce, 41, is expected to announce dates for the European and US legs of her Renaissance stadium tour early next month.

Beyonce will hit the road as early as May, performing to crowds of up to 80,000, sources revealed.

It is not known whether she will play Wembley, but insiders claim the Single Ladies singer has bagged the Stade de France near Paris for May 26.

A US source said: “Dates have been booked and arrangements are being made. Bey and her team have been rehearsing in secret for weeks to make sure the show is perfect.

“She is known for her incredible performances and she has been working hard to make sure this is her best tour yet. With Madonna touring and Taylor expected to follow suit, Beyonce is determined to stand out from the crowd.”

The source said a taped live show and documentary may follow, adding: “Beyonce wants the show to be camp, uptempo and fun as well as slick and arty. will be the biggest travelling party of the summer.”
Read more
News & Rumors, Tours

Beyoncé Was Reportedly Recovering From Foot Surgery Before Show In Dubai

Klaudia//January 22, 2023
It’s been revealed by one of the attendees at Beyoncé’s private show at The Royal Atlantis in Dubai that the Grammy award-winning hitmaker had recently recovered from foot surgery. Despite the private concert’s strict “no phone policy,” leaked footage surfaced online. Guests were handed specially-made pouches to put their phones in due to the event’s strict no-filming policy, but it doesn’t look like it worked. The event was invite-only, with several celebrities, journalists, and influencers attending the show.

One of the attendees, cultural critic, and author Gerrick Kennedy, shared some of his thoughts on Queen Bey’s “BEYLANTIS” performance, tweeting, “the voice gets better and better, mama was doing her good singing.” Kennedy also revealed that the “Break My Soul” singer was recovering from foot surgery.

“BEYLANTIS was quite the unexpected show,” he tweeted on Saturday (January 21). “That voice is just getting better and better. Mama was doing her good singing. Mind-blowing to see her and Blue Ivy perform together. Even more in awe to hear she did this after foot surgery. It’s unclear what injury led Bey to the operating table, but it’s good to know she’s doing better.”
Read more
News & Rumors, Personal Life

Klaudia//January 22, 2023
Beyonce made her grand return to the stage last night (January 21) at the lavish opening of Atlantis The Royal in Dubai.

And while it was a private event, the star-studded spectacle sparked ample excitement on social media (where it trended in earnest) – particularly as it served as Queen Bey’s first full-length showing since 2018.

Viewers of the clips that spilled online (despite the no-filming policy) noted that the superstar’s setlist did not include any tracks from her chart-topping ‘Renaissance’ album.

This prompted speculation that the upcoming GRAMMY Awards could be the platform for a rousing ‘Renaissance’ showing.

And now a new report suggests that may well be the case.

In speculating about where a future ‘Renaissance’ live showing could land, Variety shared:

Klaudia//January 21, 2023
Beyoncé is headed into the woods — and the urban jungle — for the latest drop of her Ivy Park collection with Adidas.

Called Park Trail, the line is intended to be a “trail-blazing expression of performance wear inspired by the resilience of the outdoors, the spirit of the streets, and the possibilities of the future,” the companies said.

Layering pieces and storage options are emphasized throughout the collection and the color palette includes both traditional outdoors options such as Denali green, cream white and indigo as well as eye-popping hues of solar orange, purple and lime green.
Read more
News & Rumors, Fashion Lines

Beyonce Invites Journalists and Influencers to Dubai for Luxury Weekend

Klaudia//January 21, 2023
Last July, Beyoncé unveiled the long-awaited Renaissance, a multi-Grammy-nominated, critically vaunted album that explicitly celebrated queer dance music. She has not yet announced a tour behind the album, but this weekend several journalists and celebrities might be the first to see the singer perform live for the first time since a Kobe and Gianna Bryant tribute set in 2020. (At the Oscars last March, she aired a pre-taped performance of her King Richard song, “Be Alive.”)

Per an invitation that many publications (including Pitchfork) received from the musician’s team, the singer is hosting an all-expenses-paid luxury weekend in Dubai, taking place January 20 to 22. The invite is for the unofficial opening of Atlantis the Royal hotel, and begins as follows: “Beyoncé invites you to a weekend where your dreams become your destination. You and a guest are invited for epicurean feasts, beachside indulgences, and special reveal experiences including business class airfare, first-class ground transportation, and first-class accommodations at Atlantis the Royal.” A “once in a lifetime performance” is mentioned, too, but without any artist attached to it.

The Dubai weekend has been sparsely reported, with UK tabloid The Sun reporting in December that Beyoncé was planning an hourlong performance at the city’s luxury resort Atlantis the Royal. A source told The Sun that Swedish House Mafia would DJ at an afterparty, which is also confirmed by the invitation.
Read more
News & Rumors, Performances

Klaudia//January 15, 2023
Renaissance has earned Beyoncé some big nominations in the NAACP Image Awards’ music categories this year. On Thursday, the organization announced the nominees for this year’s awards show, and Bey leads with five nods.

Fans can now vote through Feb. 10 for their favorite artists online. Winners will be announced on Feb. 25 on BET.

Below are Beyonce's nominations:

Klaudia//January 15, 2023
Nominations for the UK’s equivalent of the Grammys, the BRIT Awards, were announced this week and brought major listings for the likes of Harry Styles, Beyonce, FLO, Burna Boy, Stormzy, Central Cee, and more.

Ahead of the February 11 ceremony, which is being hosted by Mo Gilligan and airs live from London’s O2 Arena, check out the list of nominees below.

Klaudia//January 15, 2023
The nominations for the 2023 iHeartMusic Awards have been announced. Beyoncé has five nominations, including Artist of the year.

Polls for social awards are now open and run through March 20 at 11:59 p.m. PT. Get details on how to vote here.

What’s even more impressive, is that “Cuff It” climbed the chart without a music video or a pushed promotional strategy. The song gained traction on its own from Beyoncé fans and TikTok users, the latter of which taking part in a fun dance trend started by users Maycee (@maycsteele) and Kaitlyn (@ogpartyhardy26).
Read more
News & Rumors, Music, Charts, Rankings & Ratings

Klaudia//January 14, 2023
Adidas and Ivy Park are continuing their partnership with a new release.

The German sports’ giant and Beyoncé’s apparel brand announced on Friday the release of the Ivy Park Top Ten 2000 sneaker, a basketball shoe that is “designed for the journey ahead,” according to the brand.

The brands took inspiration from the Top Ten 2000 sneaker that debuted in the early Aughts, blending archival designs with a modern Ivy Park twist. The sneaker is designed with mixed materials like technical mesh and suede, features a soft foam-fitting Neoprene and a molded heel piece. The style comes in an orange and beige colorway with multicolored laces.

The Ivy Park Top Ten 2000 sneaker is priced at $200 and will be available starting Jan. 20 on the Adidas Confirmed App. 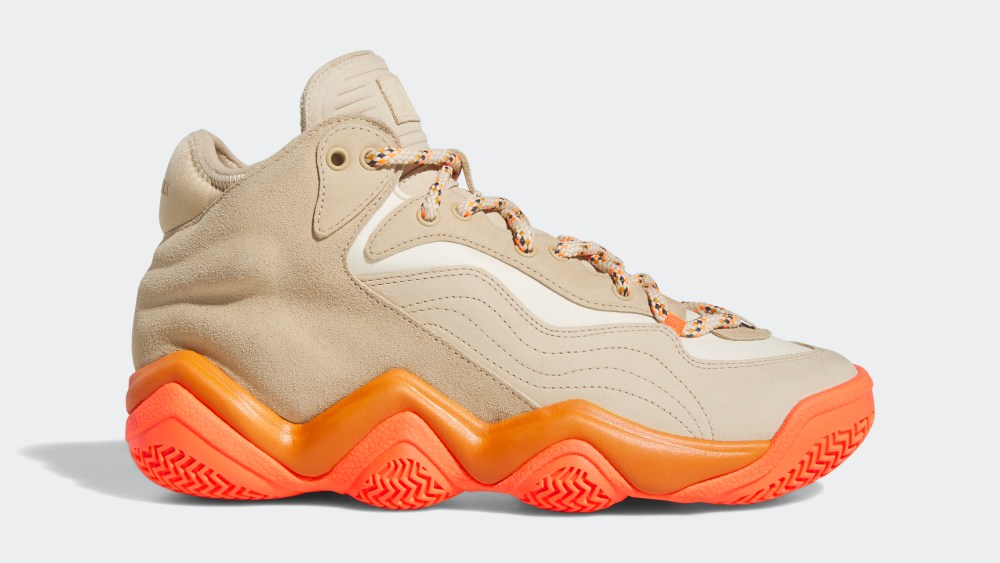 Klaudia//January 6, 2023
There’s no better time to “release your wiggle” than at the top of the new year when everyone’s setting up their fitness goals. Lucky for the Beyhive, Beyoncé‘s beloved hits will soon soundtrack their workouts in the Apple Fitness+ program.

Apple Fitness+ announced Thursday (Jan. 5) that Queen B is the latest superstar highlighted in its Artist Spotlight series, which dedicates an entire set of workouts to a single artist and their discography. Her music, including songs from her latest Billboard 200-topping album Renaissance, will be featured in seven specially curated cycling, dance, HIIT, pilates, strength, treadmill, and yoga workouts. The Beyoncé-inspired workouts will be available in the Fitness app on Monday, Jan. 9.